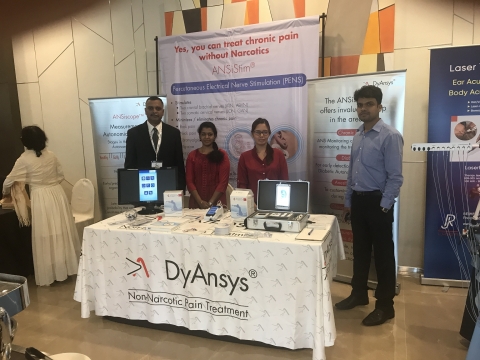 In recent years, pioneers in the field of auriculotherapy have been systematically working to raise awareness and increase the use of this technique to effectively treat a wide range of conditions. They have sought to strengthen the foundation and impose scientific rigor around the practice as they integrate a Western and Eastern approach to health care. Evidence of their success was visible in the scientific papers, presentations and participants of the 9th International Auriculotherapy Symposium held recently in Singapore. Indeed, auriculotherapy is being used by a growing number of MDs, including numerous neurologists.

DyAnsys holds a special role as its products fit with both the Western and Eastern approaches. The conference was an opportunity to show how our products can be used in many circumstances.

Auriculotherapy falls into the category often referred to as “alternative medicine,” which is more widespread in the Far East than in the U.S. or Europe. This is likely due to issues of accessibility and affordability.

A few years back, while attending a health seminar in New Delhi, I discovered that the Ministry of Health in India has a department of AYUSH – Ayurveda, Yoga, Unani, Siddha and Homeopathy. I, along with others at the conference, was surprised to learn that there were 700,000 practitioners of AYUSH in India. When the question was asked, “Where are they all?” the prompt answer was, “Who do you think is treating all the patients outside of the big cities and towns.?”

The majority of the Indian population, about 70%, live outside of the big cities. But the practitioners of Western Medicine prefer to practice in the cities. This is seen to an extent in the U.S. as well.

It’s not just location but also cost. For the rural Indian population to have access to diagnostic equipment and medications, the price must be less than 20 percent U.S. prices.

There are benefits to these forms of alternative medicine, however, that should not be discounted simply because of their origin.

These alternative medicines have something in common. They treat the mind, body and spirit while Western medicine is focused mainly on treating the body. Given their nature, these specialties bring balance to the autonomic nervous system.

As an indication of the difference in approaches, consider that a so-called placebo is an important part of Eastern Medicine because it is considered “medicine for the mind.” It can most definitely balance the autonomic nervous system.

The DyAnsys Role in Auriculotherapy Advances

The DyAnsys ANSiscope fits in well with these concepts as it is the only device that can measure the autonomic nervous system on a beat to beat basis. This can be used to better diagnose and identify health concerns as well as measuring the effectiveness of various treatments.

The DyAnsys Primary Relief® is a device for administrating auricular medicine and can be used in the treatment of chronic pain, the detoxification of drug addicts and the management of post-operative pain.

Given our products and position in the market, we believe that by working with the MD population involved we can help add scientific rigor that will lead to a greater acceptance of these options.

2.  Our expertize in devices for auriculotherapy

3.  Our focus on simplifying the diagnostic and treatment procedures and making them easy and affordable for all practitioners to use.

Based on what I discovered at the Symposium, I expect to see more precise auricular diagnosis along with technological advancement in areas such as the selection of ear points. I also anticipate more clinical studies that will demonstrate the effectiveness of auriculotherapy for diagnostic accuracy and treatment.

At the Symposium, there were many presentations covering a wide range of topics including neurostimulation, acupuncture, transcutaneous vagal nerve stimulation, and the neurophysiology basis for auricular acupuncture in perioperative pain management.  Workshop topics included Auriculotherapy in Neurology, Battlefield Acupuncture, Auricular Diagnosis, and Essentials of Auriculotherapy. DyAnsys India presented New Insights on the ANS Due to Beat to Beat Monitoring.

The Symposium was organized by Dr. Im Quah Smith, University of New South Wales, who specializes in mind-body medicine and preventative medicine in patient well-being. Other leaders included Dr. Raphael Nogier, the son of auriculotherapy pioneer Dr. Paul Nogier; Dr. Frank Bahr who has led a massive German effort in this field and has been one of the driving forces in auriculotherapy; Dr. David Alimi, who published a landmark study on the effects on the thumb via auriculotherapy among his many contributions, and Dr. Terry Oleson, a US pioneer and driving force with whom DyAnsys has co-produced a book on auriculotherapy.